Godox announces the M600Bi to enrich its professional Knowled Series with bi-color feature. With an output of up to 730 watts, it provides high-quality lighting to release the full potential of all creators.

As the first revolutionary fixture of the Knowled Series, the daylight M600D has received great comments from the industry. Professional film-maker J.T. Shaver said, “I have relatively high expectations (on the M600D). It is well-designed, well-made, and not lacking when it comes to power output and color accuracy.” Now, after releasing the M200 and M300 early this year, Godox enriches the 600-watt fixture with the bi-color M600Bi for diverse shooting occasions. 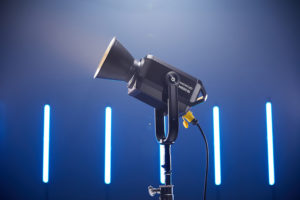 The M600Bi features sturdy build quality. It has a powerful cooling system that offers rapid heat dissipation in a process barely detectable to human ears, while the fanless mode is also available. Besides AC power supply, the M600Bi could also be supported by V-mount batteries, enabling creation at any location. The robust rolling case makes it safe from damage and easy to transport.

Easy and convenient control is an important part of the M600Bi’s design too. The brightness could be dimmed by 0.1% to 10% increments. As for control methods, the M600Bi supports remote, APP and DMX control. There are 21 fx effects and four scientific dimming curves built-in for various shooting scenarios.

If you are interested in having a glance at the M600Bi, the new Godox bi-color 600-watt flagship, please feel free to drop by Booth S122 at the 2022 Cine Gear Expo Atlanta