For the monitoring of audio streams, Riedel’s AMA allows for a direct connection to any SMPTE ST 2110-30 (AES67) stream available on the network — either dynamically managed via NMOS or in a static IP/SDP-based configuration, mixing the audio directly inside the SmartPanel. The app can be configured via a dedicated configuration tool or a broadcast controller using the built-in API. In addition, the selection and management of monitored audio sources is simple and flexible. Users can monitor up to 16 stereo/mono SMPTE ST 2110-30 (AES67) streams in parallel. A total of 256 audio sources can be preconfigured and managed directly on the RSP-1216HL and RSP-1232HL SmartPanels via their high-resolution touch displays and intuitive interfaces. 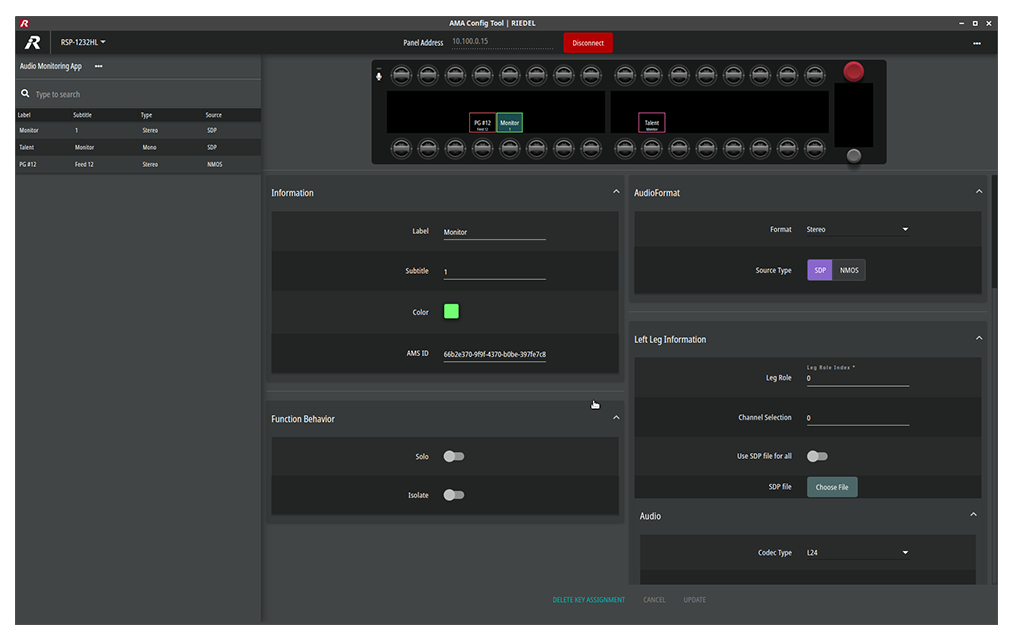 The AMA also enables operators to monitor audio streams while simultaneously managing a production via the Intercom App. With both apps running on the same endpoint, their inter-app behavior can be configured to automatically lower the monitoring volume in the event of an incoming call, or lower the intercom volume when soloing an audio source. And with the Control Panel App, 1200 Series SmartPanel users can trigger actions in third-party control, monitoring, and automation systems while receiving visual feedback on configuration status and changes via colors, labels, subtitles, and icons on the keypanels’ touch screens.

“It can be extremely difficult to integrate intercom, control, and audio monitoring at the same endpoint in narrow, space-constrained environments,” added Uhlitz. “With the AMA, our 1200 Series SmartPanels are up to the challenge, offering all of these capabilities in a single piece of hardware. In addition, they are the only keypanels that can provide intercom functionality and audio monitoring simultaneously.”

Riedel’s AMA and 1200 Series SmartPanels are on display at IBC2022 in stand 10.A31. Further information about Riedel and the company’s products is available at www.riedel.net.