MP AR: The future of movement

An app for the world’s most simple, intuitive and powerful motion control system

In a world where game engine technologies, VFX, and volume stages are bringing a whole new level of integrated technologies, filmmakers are constantly mastering new challenges. Motorized Precision’s MP AR uses AR technologies to visualize cinema robots, products, and robot movement. Simply calibrate your robot and begin working with a virtual bot capturing accurate movements ready for production. Calibration is stored using a QR code, so it becomes only one button to snap it into perfect alignment for every shot. Then send recorded moves directly to the MP Studio timeline with a single tap.

Create your shot with an iPad and see the exact path, every pan, tilt, and slight shift captured for your robotic camera move. Program organic and even handheld camera moves that can be perfectly repeated again and again in a few seconds. The data transfers immediately to MP Studio, where cleaning and tweaking your move is a simple timeline edit. Your director, stunt team, or VFX supervisor can give clear MoCo shot ideation from their hotel rooms with virtual models. 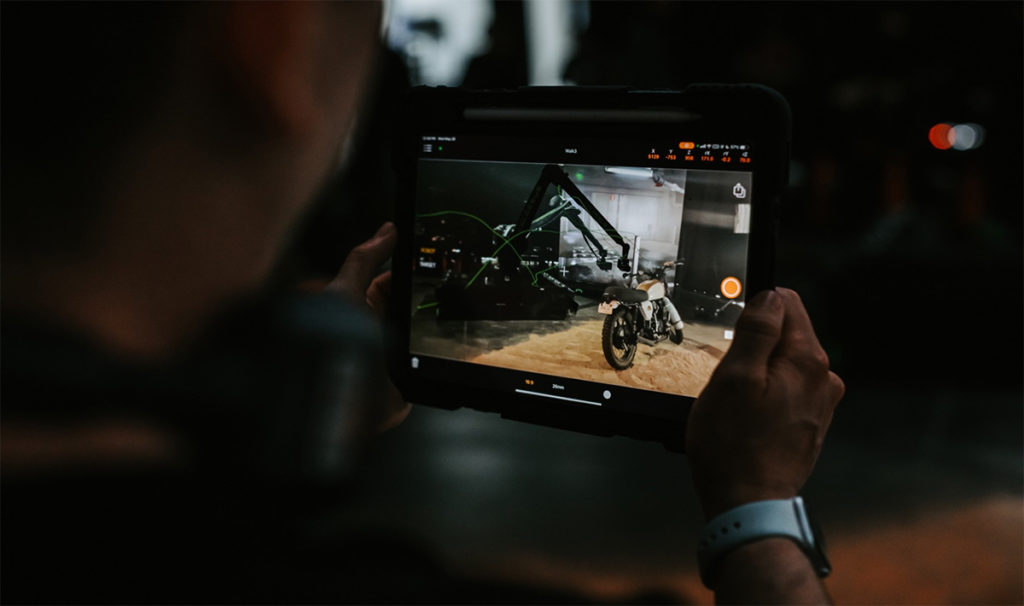 What about planning the practical realities of filmmaking? Can it work with the smaller Mia robot? Will this rig fit on location? Is a Colossus needed to make this shot happen? MP AR’s previz capabilities can now answer all these questions right on an IOS device before you ever step on a set. It’s easy to communicate with the whole production team with recorded previews and exporting keyframes.

After his first shoot with MP AR, JT McCreery, Creative Director at Gear Seven, said, “To now just be able to grab your iPad or iPhone and walk out and set the frames that you’re looking for… to put that power in a director’s hands improves so much communication with the rest of the crew.”

Justin Wylie, DP and Technical Director at Shift Dynamics, commented, “It was so easy just to frame it up the way I’d frame up a normal move. My jaw was on the floor to even get a shot that looks convincingly handheld out of a robot. It was crazy. Being able to do that without hours of programming keyframes and trying to make it look natural, it was just there.”

A few features are not found anywhere else:
– MP AR uses Reality Kit and Lidar-equipped iOS devices with object occlusion support. MP AR allows you to visualize AR objects in front and behind real-world objects to make calibration simpler and easily see if a robot will fit or how a shot will look in your real-world space.
– Target QR images can be affixed to any object and used to place target keyframes at precise points by simply pressing the shutter button.

MP AR’s worldwide release will change the way people approach Motion Control, VFX location scouting, virtual production, and previz. You are getting the camera back into the cinematographer’s hands. The future of high-end filmmaking can now be planned and built with a phone. Available June 9th in the App Store.

Motorized Precision is a motion control robotics company based in Portland, Oregon.